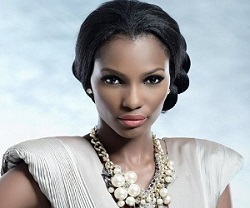 Agbani Darego was born on 22nd December 1982 in Lagos state, Western Nigeria.  She is a native of Abonnema and grew up the D-Line district, both in Rivers State.

She attended Bereton Montessori Nursery and Primary School, went further to Federal Government College Abuloma and the University of Port Harcourt, Rivers State, where she studied Computer Science and Mathematics.

She also has a degree in Psychology from the New York University, in the United States.

Darego began her modelling career in 2001, where as a teenager she longed for a role in modeling and later, was able to audition for the face of M-Net Africa.

That same year, she was crowned the Most Beautiful Girl in Nigeria, contested at the Miss Universe (becoming the first Nigerian to make the top 10 semifinalists) and in November that same year, she became the first indigenous African to be crowned Miss World.

Her successful career in modelling led to her wining deals and contracts which includes: Featuring in print commercials for boutique chain Collectables, participating in Frock ‘n’ Roll – a charity fashion show in Barcelona, negotiating and bagging a modelling deal with Trump Model Management in America, and a three-year contract with L’Oréal.

In 2010, she launched a style and fashion reality show Stylogenic on Nigerian television, and three years later announced her denim range, AD by Agbani Darego, which includes jeans, dresses, sunglasses and bags.

She has presided as a judge on numerous pageants, fashion and modelling competitions including Miss World 2014, Miss England 2002, Mr. Scotland 2002 and Elite Model Look Nigeria 2012 and 2014.

Several brands she has modelled for include Avon, Christian Dior, Sephora, Target, and Macy’s.

Agbani Darego was awarded honorary chieftaincy by the Council of Chiefs of Lagos State, following her winning the Miss World in 2001.

She is Married to Ishaya Danjuma and together they have a son.