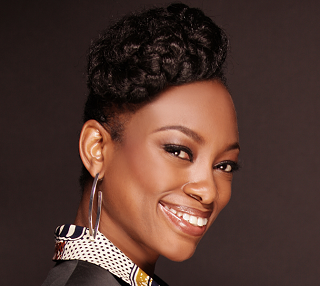 Femi Oke was born on 30 June, 1966 in London.   She hails from the Yoruba tribe from the South Western part of Nigeria.

She attended Ensham Secondary School in Tooting, South London and obtained her Bachelor’s Degree in English Language and Literature from Birmingham University.

Her career started at the age of 14, where she was a Junior Reporter for London’s Broadcasting Company (The First talk radio station of U.K.).

She graduated from Birmingham University with a bachelor’s degree in English Literature and Language.  Right after, she joined British Broadcasting Company (BBC) as a reporter and producer.

At BBC, she presented the BBC’s flagship educational science program titled ‘Science in Action’ and was also a presenter of Top of the Pops (a British music chart television program).

In 1993, Femi Oke worked for a cable station called Wire TV.  She presented on several shows of the station including the popular Soap on the Wire, alongside soap opera expert Chris Stacey.

She has also worked for GMTV, London Weekend Television, Men & Motors, Carlton Television, Sky television and all of the UK’s terrestrial television networks.

In 1999, she joined Cable News Network (CNN), where she anchored for the CNN International’s World Weather service at the network’s global headquarters in Atlanta, Georgia.  She presented weather segments for the programs Your World Today and World News.

She also regularly hosted Inside Africa, a program that looks into the economic, social and cultural affairs and trends in Africa.

Femi Oke graced the invitation to teach on behalf of the United Nations World Meteorological Organization in Buenos Aires, Argentina.  She steered lectures for the University of Liberia, Emory University in Atlanta and was a guest speaker at the United Nations, where she addressed the World Food Program in Rome, Italy.

In 2005, She featured in the short film ‘The Last Hour’ and is a co-director of Fazoke Films, a documentary film production company.

She is happily married and currently lives with her husband in Atlanta.